If you live here, you’ll get why it’s funny.. 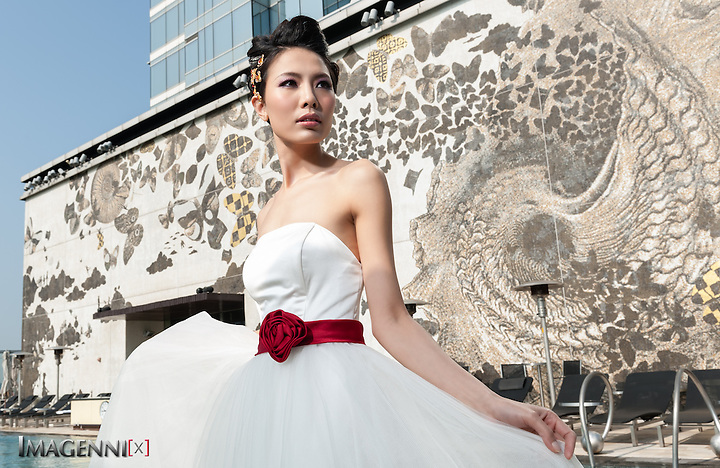 Fashion wedding promo for W Hong Kong – In mid-February the marketing team at W Hong Kong asked whether I could produce a series of images showcasing the hotel’s facilities, for use in an in-house sales application that would be shown to prospective wedding clients. “Holy crap!,” I said to myself. What an opportunity. Complicating the request was that the only window available for photography was the 4th and 5th of March while the images were needed by the 12th, so they could be used at a wedding expo in the middle of the month. “Sure,” I said out loud, “That won’t be a problem…”

Despite their busy schedules, the hotel’s event and marketing teams worked with me for the next two weeks to select models, book hair and makeup artists, source wardrobe, spec floral arrangements, scout nine locations, approve a shooting plan and reserve rooms and venues, to make “sure” they would be available. The line from Robert Burns’ poem “To a Mouse” provides a fitting description for the two days of photography: “The best laid schemes of mice and men go often awry.”

From emergency hospital visits of key team members in the days leading up to the shoot, to unexpected late-morning swimmers, a wedding party that chose to shoot all of their group portraits in the middle of one of our locations, and a last-minute doubling in the size of an important corporate event, conditions were ripe for a disastrous shoot. If we hadn’t planned down to 30-minute increments, with a detailed shooting plan covering almost 30 scenes across our 9 locations, the project probably would have fallen apart. On the back of a tight plan and the event team’s advance briefing of key hotel staff, we were able to adjust our schedule and complete 85% of the planned shoot within the available shooting window. Disaster averted and a client who was happy to get their finished images in time for the wedding expo. More images are in the gallery Lifestyle.

I love the use of old shipping containers as meeting and collaboration space for this shipping company.

More images at the eOffice Blog. 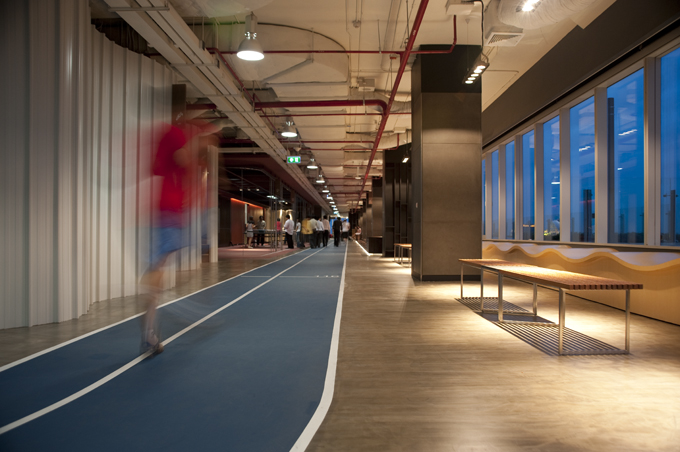 The headquarters of Total Access Communication PCL (dtac) in Bangkok sets a standard for creating an appealing workplace that communicates the company’s brand approach to, “play and learn.” Designed by Hassell and opened in 2009, one of the facility’s highlights is its Funfloor with indoor soccer, table tennis, running track, and concert and performance spaces.

I love light. Even flat light on a hazy day is beautiful.

The IFC2 curtain wall reflects the flat light of another hazy day in Hong Kong, resulting in an interesting, monochrommatic effect that seems to flatten the subtle articulation of the building facade.

As the gondola slowly moved into position, the cloud cover was shifting and it looked like I wasn’t going to get the shot that I wanted. I actually put my camera away, but just before the gondola drew level with the division in the exhaust manifolds, the clouds moved in again, to give a relatively flat light on the east face, while the sun hit the south face making a nice highlight.

This was even better than I imagined and I would have missed it if I hadn’t looked back just one more time. 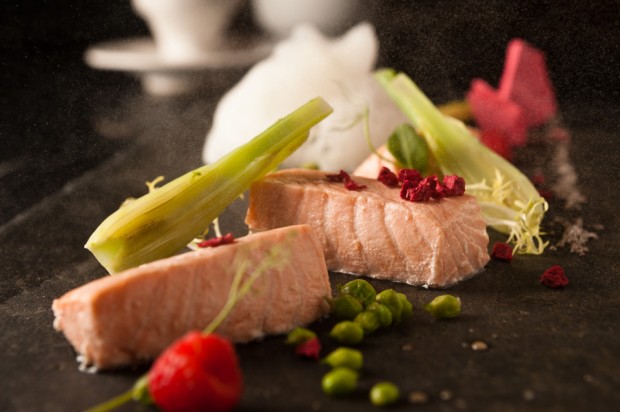 While the lighting in this image is very simple – a gridded softbox on the left, to pick up the texture of the salmon and celeriac, and a white reflector on the right – the chef’s presentation turned this into one of my favorite photos.

To add some variety to a restaurant promotion shoot, I asked the chef to plate one of his dishes directly onto the table. He suggested a piece of slate that he had on hand and WOWED me with this presentation. Then, while I was shooting, he spritzed the dish with an atomizer to give it a clean, fresh feel.

It was awfully hard to keep myself from sampling… 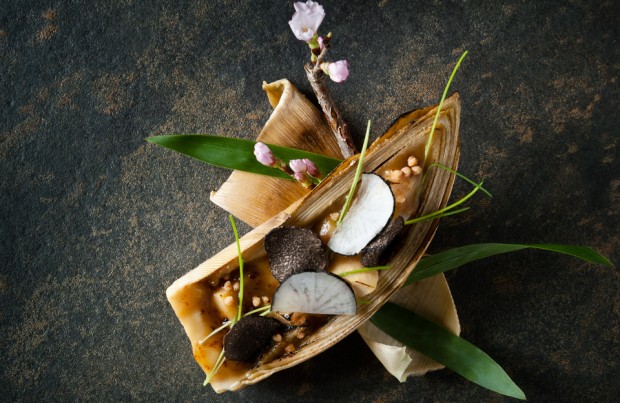 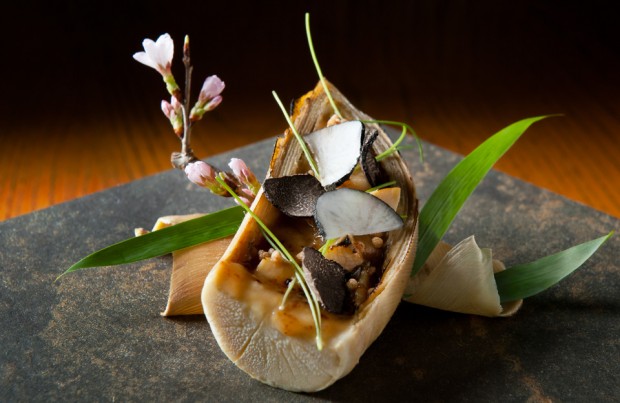